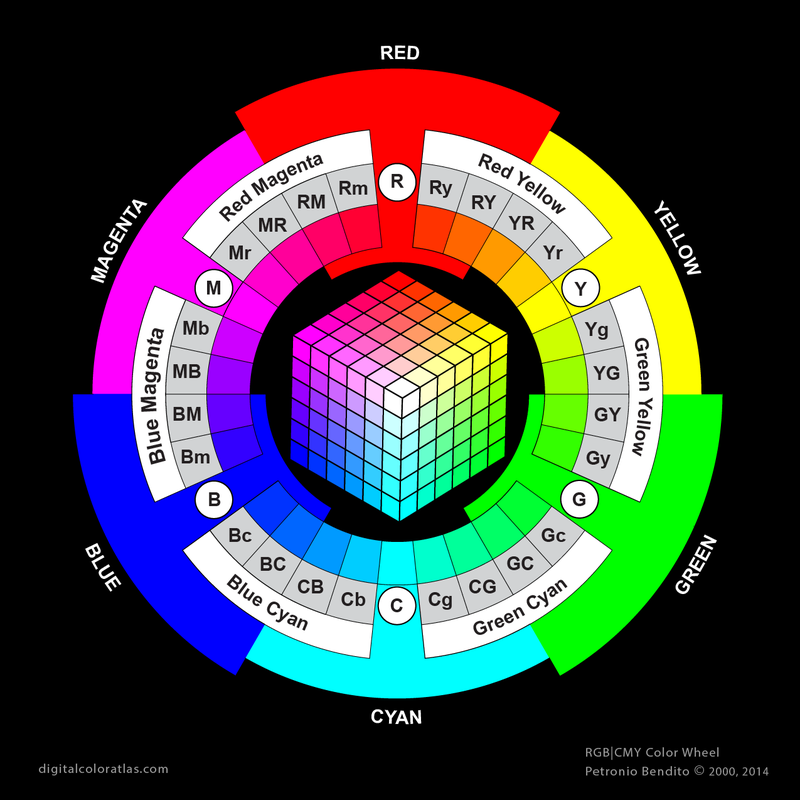 The RGB|CMY Digital Color Wheel: A Banquet of Color!

How is color produced in the computer?
We will use the RGB|CMY Digital Color Wheel above to explain how this works. If you have the microscope you can download the free test pattern below and try it yourself.

The RGB Test Pattern includes the main color families of the RGB|CMY Color Spectrum, black, white and grays.  It was designed so you can look one color at a time for comparison and contrast
[ TEST PATTERN IMAGE]
Caption

How to Make Millions of Colors

An average computer screen can produce millions of colors, but what you will find through the microscopic experiment are only three colors: Red, Green and Blue. (Not even white! The one you are seeing right now. Nor oranges, turquoises, pinks, fuchsia, etc.)

So what is going on? The screen projects red, green and blue lights with various intensity to produce the colors you see. Colors are wavelengths captured by the rods and cones in your eyes and interpreted by the brain. Your brain is a color mixing machine!

Now let's watch how the the colors will dim as you move from White to Black in the gray scale of the RGB Test Pattern.
...

I will take this opportunity to introduce some technical terms. The RGB|CMY Digital Color System is an additive color system. That is the physics of mixing light to create all the beautiful colors that you see in your digital gadgets' screens.

The RGB|CMY Digital Color Wheel is made up of three primary colors. The colors are represented by the beginning letter of their names:

There are three secondary colors on the wheel that are produced when primary colors are mixed:

Tertiary colors are made from a combination of primary and secondary colors.  For example, Red (R) and Yellow (Y) produces the set of four tertiary Red-Yellows.

The notation for the tertiary color is the combination of the two beginning letters of the colors they are made of.
For example, the Red-Yellow sub-set is labeled Ry, RY, YR, Yr. The upper and lowercase letter are used to represent the level of perceptual predominance of either a primary or secondary color. The capital letter indicates the predominant color:

The complete sets between Primaries (R,G,B) and Secondaries (C,M,Y) are labeled as follows:

How to Put this Knowledge to Use

A more detailed explanation of this notation can be found in the following paper: Bendito, Petronio. RGB Colour Palette Based on Hue Relationships [proceedings]. 10th Congress of the International Colour Association, Granada, Spain, 2005.